(WASHINGTON, D.C., 6/12/08) A coalition of Islamic and research groups today announced the launch of a nationwide census project, the first comprehensive survey of its kind, intended to collect accurate data about America's mosques.

The Council on American-Islamic Relations (CAIR) and the Islamic Society of North America (ISNA) will conduct the study over the summer and fall, publishing the findings in a report to be released in early 2009.

The census is co-sponsored by a coalition of organizations including CAIR, ISNA, the Muslim American Society (MAS) Freedom Foundation, the Imam Mahdi Association of Marjaeya (IMAM), the Islamic Circle of North America (ICNA), the Muslim Alliance in North America (MANA), the Muslim Public Affairs Council (MPAC), the Hartford Institute of Religion Research (Hartford Seminary), and the Religious Congregations and Membership Study 2010 (a project of the Association of Statisticians of American Religious Bodies).

The goal of the census is to contact every mosque and Islamic center in the United States to compile accurate information about the Muslim community in America, specifically relating to size, infrastructure development, the participation of women and youth, and depth of involvement in American society.

Dr. Syed Sayeed, National Director of ISNA, said: "Muslims in America are making an important contribution in enriching the mainstream of America. A recent study published by Harvard University press has shown that the Pakistani American Muslims alone annually donate around a billion dollars worth of cash, goods and services. Our African American Muslims made us proud by providing leadership in the political field and we were able to have our first two Muslim congressmen from that background. It is critical for us to get a clear count of this richly diverse community, a study of our mosques and institutions serving the Muslim community and educating both Muslim and the mainstream community about Muslims and Islam."

"We at MAS Freedom consider this to be a very significant project that will have powerful social and political implications for the national Muslim community both now and for years to come. We salute CAIR and the other partner organizations that will participate in and expand the outreach of this very important census," said Ibrahim Ramey, Director of the Human and Civil Rights Division of MAS Freedom Foundation.

"Projects such as the mosque survey enhance understanding and engagement of the Muslim American community with various sectors in our society in an open and transparent manner," said Haris Tarin, Director of Community Development for MPAC.

"The Muslim community is an important demographic in our country, one that is often not adequately covered. We are excited that these Islamic organizations are coming together to make this count, and we support their effort fully," said Richard Houseal of the Association of Statisticians of American Religious Bodies, which helped design the survey.

Lesbian, gay, bisexual and transgender (LGBT) groups in Asia have agreed to develop an international network to advocate protection of their rights in their respective countries and at the regional level.

Bali hosted a conference of the groups from June 2 to 6 in the tourism enclave Nusa Dua. The conference was attended by 21 participants from eight countries -- Indonesia, Nepal, India, Pakistan, Bangladesh, Sri Lanka, China and Thailand.

"We agreed to make some kind of international network to advocate protection of LGBT rights in our countries," Rido Triawan, head of Arus Pelangi, an Indonesian non-governmental organization that fights for LGBT rights, told The Jakarta Post on Saturday.

He said it would be like an open communication channel connecting LGBY communities in different countries, so that when there was a problem in one country the communities could work in unison to apply political pressure on the government in question.

"We are all at this time suffering from stigmatization, discrimination, persecution from religious groups and discriminative government regulations," he said.

"For example, the 2004 regional regulation in Palembang, South Sumatra, categorizes LGBT as a form of prostitution," Rido said.

He said religious-based persecution was the most difficult problem LGBT groups faced in Indonesia.

"Those religious doctrines are then being integrated into the formal education curriculum. Naturally, the curriculum educates the students that the only 'normal' and accepted sexual orientation is heterosexuality," he said.

Consequently, other sexual orientations are considered as not "normal" and unacceptable.

This has resulted in students and communities discriminating against members of the homosexual and transgender community.

"There are many cases of discrimination experienced by members of the LGBT community. One example involved a man who openly acknowledged his sexual orientation of being gay. Suddenly, his company fired him for no apparent reason," Rido said.

He said other gay workers faced varying levels of hostility from co-workers.

"They suddenly keep a distance or, even worse, socially isolate him just because he is gay," he said.

He said upholding the rights of the LGBT community was a significant issue since sexual orientation was also part of human rights.

Rido said the LGBT community in Indonesia just wanted to be acknowledged and treated the same as the other Indonesian citizens, who enjoyed the right to education, health, work and all the other basic human rights.

"It is still very hard for people to accept the fact that LGBT are also human beings, who should be treated humanely," said Arus Pelangi secretary general, Yuli Rustinawati.

A Sri Lankan LGBT activist, Rosanna Flamer-Caldera, said the situation in Sri Lanka was worse than in Indonesia.

"Being part of LGBT communities in Sri Lanka is similar to committing a criminal offense. That's the reason why people with LGBT sexual orientation prefer to be invisible," she said.

She said members of the LGBT community in her country who fell victim to criminal acts often didn't report their cases to the police, because the treatment they would receive could be worse than the perpetrators of the criminal acts.

She said she participated in LGBT conferences and seminars around the world to learn about human rights instruments that could be used to advance the struggle in her country.

Author Looks to the Koran for 99 New Superheroes Naif al-Mutawa, 37, the creator of the comic-bookseries, The 99, the first Western-style comics based on an Islamic concept. (Fiza Ambah - The Washington Post)

Muslims talk about being gay and religious at a forum at the MFA in Boston. Courtesy photo.

Imtiyaz Hussein says that coming out as a gay man who is also a Muslim was never a problem. But for Mohammed El-Khatib, whose parents hoped he would pass on the family name, it was. Saadia Toor, on the other hand, said she feels that gay Muslims face challenges similar to all religious followers — stereotypes, misunderstandings and resistance.

The three spoke on May 18 about what it means to be "Queer and Muslim" during a panel discussion at the Museum of Fine Arts  in Boston that was hosted by the Massachusetts Area South Asian Lambda Association. The talk followed a screening of the documentary "A Jihad for Love," a film about the hidden life of being Muslim and gay.

Hussein, who is the founder of the Massachusetts Area South Asian Lambda Association, said that he reconciled his faith and his sexual preference early on.

"I was always as certain of my faith as my sexuality," said Hussein, a native of Tanzania who is of Indian descent.

"There were never really any negative messages growing up, I was kind of left alone to see if I could personally reconcile with having the two things as part of my identity simultaneously."

After he came to terms with his identity, he said, being gay and Muslim was never a problem for him.

Toor, however, said that homosexual Muslims often deal with stereotypes and misunderstanding from others.

"Being a Muslim queer is always scary because you carry this burden of representation; you're always in this position of worrying that whatever you say is being represented correctly —  you always have to contextualize and qualify everything," said Toor, who was Muslim but left the faith to become a communist. A native of Lahore, Toor is a member of the Pakistani political-action group Women's Action Forum and teaches sociology and women's studies at The College of Staten Island, City University of New York. She said that panel discussions, such as "Queer and Muslim" can overlook the fact that homosexual followers of Judeo-Christian religions can face challenges just like gay Muslims do.

El-Khatib suggested that the Muslim faith has provided him both problems and solutions. The son of a Lebanese mother and a Palestinian father, he said that he grew up in a homophobic household, even though his parents are secular.

"I actually turned to Islam and the Muslim religion for answers, and they were more open to the idea than I had originally thought," said El-Khatib, who was born in Lebanon and moved to the United States in 1999. His father, however, opposed homosexuality and viewed it as a "disease" and felt that that gays "should be burned."

When he first came out to his mother, he said, the first thing she said was that he had to get married. Procreation and the passing on of the family name were important to his parents, he said. Because he was family-oriented, he said, their reaction was a difficult one.

The other panelists also said coming out was a challenge. "I always wondered, why do people care so much about who I choose to sleep with?" said Toor. "At the heart of it is concern about existing kinship structures and where they fit in. It has to do with the perpetuation of structures of power, which are usually patriarchal. It's all about who has the power to say things and who gets circulated and heard."

Hussein agreed that coming out can be difficult and noted nuances of doing so among his Muslim peers. The Muslims he knows, he said, accept that he is gay, until his lifestyle violates the family norms of the faith.

But why? asked El-Khatib. "Our sexuality is but one frame of the entire picture. Why does it matter if I'm gay? I eat with you, I pray with you, I go to mosque. Instead of turning away, we should do the opposite; we will fight and stand by our faith, regardless of what people think." 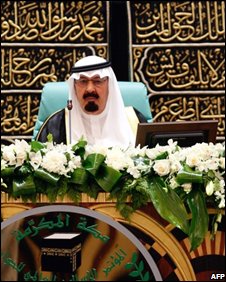 King Abdullah chaired the opening session of the three-day conference

Iran Makes the Sciences A Part of Its Revolution Burton Richter, right, an American Nobel laureate in physics who spoke at Sharif University in Tehran, called the students there "very impressive." (By Newsha Tavakolian -- Polaris)