Middle Eastern observers often assume that the deterioration of women's rights in the region is directly linked to the political rise and popularity of Islamist parties in countries across the region.

But this guest author argues otherwise. Dr. Isobel Coleman, a senior fellow for U.S. foreign policy at the Council on Foreign Relations and director of the Council's Women and Foreign Policy program, argues that the movement of these groups into mainstream politics is actually changing Islamist attitudes toward women. 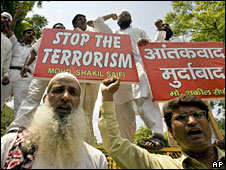 Full article from the BBC.

Violence against women has long been a controversial subject in the Arab and Islamic world. Some Islamic experts favor a husband's right to physically chastise his wife. But recent fatwahs, including from top scholars in Egypt, favor a woman's right to self-defense in cases of conjugal violence.  Edward Yeranian has more on the sensitive issue from Cairo.

The topic of men beating their wives has long been controversial in the Islamic world, with various Islamic scholars condoning it, and others insisting it should be forbidden, or at the very least, reduced to a strict minimum.

A series of recent fatwahs, in both Turkey and Saudi Arabia, followed by support by the fatwah committee of Cairo's venerable Al Azhar University, where top Islamic scholars have ruled that wives have the right to fight back when beaten, are still challenged in many quarters and difficult to apply, as Egyptian women's rights activist Nehad Abu El-Komsan, explains.

"Women can call the police, definitely, and they are supposed to have to respond to protect women. But, what happens, usually, police in Egypt care about other things, and they consider this is a private relation or something, so they do not respond in proper time. So the procedure comes after….she has right to go to police station and make a report….and make a court file….she will have a criminal case… So it depends on what [the] judge believes. Sometimes, judge gives a hard punishment or a hard court decision in this case some judges make their decision only to show men they have no right to do this, but it is not strong enough."

Do women have right to self defense?

Islamic scholars, while divided, are increasingly coming down in favor of the Western concept of a woman's right to self defense. This is the position taken recently by the chairman of Al Azhar's Committee on Fatwahs, Sheikh Abd al Hamid Al Atrash, who tells the VOA that wives have the right to self-defense when their husbands beat them "cruelly and unnecessarily."

He says that when a wife has been disobedient and her cruel husband has beaten her badly because of it, to the point of putting her life in danger, then the wife has a right to defend herself or cry out for help, according to the precepts of Islam.

While decrying harsh or cruel treatment by husbands toward their wives, Sheikh Al Atrash, nevertheless, says that Islam allows husbands to rein in their "recalcitrant wives.

Sheikh al Atrash argues that Islam provides husbands a series of measures to make their wives obedient, using various forms of discipline, from verbal admonition to temporarily cutting off relations to the eventual stage of physical punishment. He adds that the sayings of Islam's Prophet Mohammed, the sunna, forbid anything more than light physical discipline.

Conjugal beatings have become cause celebre in Arab world

A top Saudi woman journalist, Rania al Baz, became a cause célèbre in the Arab world, several years ago, when she was beaten almost to the point of death by her husband. Baz ultimately survived the beating, but pictures of her horribly swollen and disfigured face fueled the debate in the Islamic world over conjugal beatings.

Baz, in an interview with Saudi-owned MBC TV, explains how her husband beat her and the extreme cruelty and violence he employed.

She says that she had a sense that her husband was going to beat her, but thought she could forestall the beating and seek refuge at her father's house. Once the beating got under way, though, she recalls that her husband insisted that he was not only going to beat her, but kill her, as well. The husband then grabbed her by the neck, threw her to the floor and began strangling her, his face contorted by hatred and anger.

Baz adds that she lost consciousness while being strangled, and can't remember how her husband beat her face, but that she eventually found herself in the hospital, surrounded by her family.

Rania al Baz's husband, Mohammed al Fallata, was eventually sentenced to six months in jail and 300 lashes by a Saudi judge. The Saudi English-language daily Arab News called the sentence "relatively lenient," and the judge claimed that there were "mitigating circumstances."

Some countries support woman's right to protect herself

Al Arabiya TV reports that a top member of Saudi Arabia's consultative Shura Council, Sheikh Abd al Mohsen Al Abekhan, ruled in a well-publicized fatwah, recently, that a wife has the right to use the "same violence against her husband, that he uses against her." A Turkish-born Islamic scholar quickly followed suit with a similar ruling.

In Lebanon, top Shi'ite moslem cleric Ayatollah Mohammed Hussein Fadlallah came out in favor of a wife's right to self defense in a ruling that shook the Shi'ite world, several years ago, and Lebanon's Sunni Mufti Abd al Rashid Qabbani, made a similar ruling, last year.

Islamic preacher argues violence can be used as 'disciplinary measure'

Nevertheless, many Islamic scholars disagree with the recent fatwahs, or Islamic decrees, like Islamic preacher Walid bin Hadi in Qatar who argues during a Friday sermon that "violence must be used to discipline certain women".

He said everyone must be aware that beating is allowed by Islamic law as a punishment. He says no one can deny this, since it was mandated by God, who created the human being. If you buy any piece of equipment, he argues, you receive a manual to operate it. In this way, he adds, God gave the Koran to guide people, and keep everyone on the right track.

The sheikh goes on to explain why he thinks that wife-beating is necessary in certain cases.

He insists that there are some types of women with whom it is impossible to live, unless they are beaten.....These sorts of women, he adds, have been beaten throughout their lives to keep them in line, and that a husband must continue to beat them to keep them on the right track.

Despite the recently issued fatwahs permitting women to fight back when beaten, lines between those in favor and those opposed appear to be firmly drawn on Al Arabiya TV's website. A majority of men appeared to defend the beating of wives, while a majority of women appeared to oppose it.

When the men from the Committee to Promote Virtue and Prevent Vice arrived unexpectedly at a shopping mall in Jeddah, the trendy Saudi youth in their Western-style attire were seized with fear.

The religious force is notorious for beating up and arresting men and women in Saudi Arabia for what they perceive as immoral behaviors as well as Western ways of behaving or dressing up.

But this time, the bearded men of the religious police had totally different intentions. They just wanted to engage in a game of bowling with a group of youth at the mall in the Saudi coastal city, the local daily Al-Watan reported on Tuesday.

The newspaper said that high-ranking officials from this police force, who turned out to be talented bowlers, won the game against the young group of bowlers. They all engaged in a friendly conversation, Al-Watan added.

This unusual event raised questions in the kingdom about whether the morality police widely viewed as austere and brutal are trying to spruce up their public image by engaging with young people.

The few thousand clerical policemen, known in Arabic as Mutaween, have come under a lot of criticism lately for their extreme policing ways in implementing the laws of Islam in a country where the strict and puritanical Wahhabi interpretation of Islam is prevalent.

Officially recognized by the Saudi government, the religious police can raid private homes in search for "sinners" drinking alcohol or engaging in banned sexual activities. They can stop men and women who are unrelated by blood or marriage for meeting in a public place. They can also imprison those who are caught failing to perform one of the daily five prayers of Islam.

In August, the religious police banned Saudis from walking their pets in public because, they said, young men were using their dogs and cats to attract women on the streets.

King Abdullah of Saudi Arabia is trying to polish the image of his country as one of the most religiously strict places in the world. Today, an international interfaith meeting spearheaded by the kingdom is starting at the United Nations in New York to foster dialogue among different religious groups.

But the Saudi initiative has been regarded as hypocritical by some human rights organizations.

"There is no religious freedom in Saudi Arabia, yet the kingdom asks the world to listen to its message of religious tolerance. … The dialogue should be about where religious intolerance runs deepest, and that includes Saudi Arabia."

The New-York based human rights watchdog said that Saudi Arabia does not permit its citizens or foreign residents to publicly practice any religion other than Islam.

Photos: Officials from the religious police in Saudi Arabia bowled with a group of Saudi youngsters at a shopping m

US: Saudi Has 'Long Way to Go' On Religious Tolerance

US: Saudi has 'long way to go' on religious tolerance

WASHINGTON (AFP) — The White House said Wednesday that Saudi King Abdullah knows that his country has "a long way to go" on religious tolerance and is trying to make progress on the issue.

One day before US President George W. Bush heads to a Saudi-sponsored UN conference on religious tolerance, spokeswoman Dana Perino was asked about Riyadh's ban on public practice of religions other than Islam.

"He welcomes the opportunity to have this event, and he believes that the king of Saudi Arabia has recognized that they have a long way to go and that he is trying to take some steps to get there," Perino told reporters.

The meeting, which aims to promote dialogue among the world's monotheistic religions, will be a follow-up to a similar conference in Madrid in July at King Abdullah's initiative.

Bush, who will address the meeting, sees it as "an opportunity for him to reaffirm his commitment to religious freedom and tolerance and the importance of people of all faiths coming together," said Perino.

Saud Arabia hosts Islam's holiest shrines and does not permit the public practice of religions other than Islam.

"This dialogue is a good way to bring people of all religions together. And you'll hear more from the president tomorrow," said Perino.

Our new presidential elect, the voting population of California's African-Americans, and unfortunate homophobia in churches has created a fuzzy rift between blacks and gays. It's time to stop creating scapegoats and get proactive.

Full article from the Advocate - http://advocate.com/exclusive_detail_ektid65681.asp